at 2025 report frineds/alumni of future history (system transformation mapping including 150 years of journalism at the economist and 264 years by moral adam smith (ethics) scholars) aim to map how to help families/communities share solutions locally needed on finance health food jobs-rich education, 100% inclusive/resilient community partnership platforms - we offer this one page catalogue to what a billion women have networked across communities over 50 years to make progress on all deepest sdgs 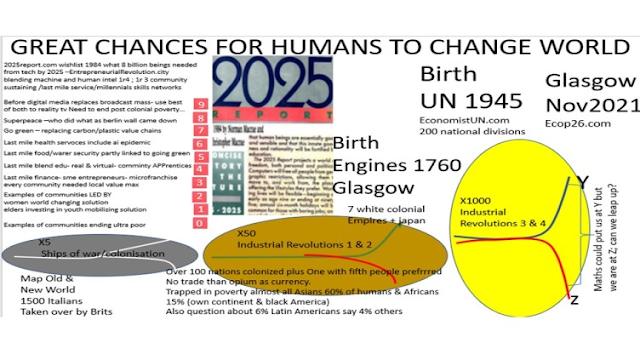 whilst these 36 COLLAB platforms seek out long term humanitarian/sd-goal partnerships which villagers turn into family entereprise/positive income microfranchises - empowerment of the world's poorest women out of bangladesh  was surrounded by hostile neighbors (and lack of access to the bay's one world trade superport calcutta) and have had no access to supercity infrastructure; countries like japan and korea south, taiwan various segements of diaspora chinese have since late 1950s multiplied both asia rising models of 100% productive rural life and supercity world trading in areas where 100 times more tech per decade could expand good for www.futireoflife.org  everywhere https://aiforgood.itu.int/about/   www.economistdiary.com www.unsummitfuture.com

chris.macrae@yahoo.co.uk - (my father wrote extensively on peaceful wsy forward after worldwar 2 at the economist from 1948 until kennedy's death 1963 when usa and eu (common ag policy)n turned inwards; he tried again from 1983 as new tech offered solutions ad did his exact prediction of when the berlin wall would fall; unfortunately his views on that (right or wrong) fort 5 chapters of 2025 report never got an massive outing

while we love to see more peace -or other mass collaborations eg climate, end pandemics , value the younger half of the world's to be the sustainability generation -  spread across the world we dont feel competent apart from identifying a few people we always try to learn from eg romano prodi, several friends in japan;  the late great ezra vogel and before him peter drucker, parts of gordon browns intel around the work especially as it connects to his 2 UN-wide roles on education and vaccination for everyone

in my life's view (statistics of auditing transparency- this assumes borders of every sort are the most risky locations for evil to gravitate and arms markets to flourish) every conflict needs such a deeply local analysis for families to start resolving that it needs to be done privately - on all other subjects i try to share ideasd as openly as possible- in the event you want to share local conflict resolution views please mark mail conflict or private; i believe in community facilitation tools like harrison owen's practice of peace but this is completely neutral other than valuing families- eg harrison owen naiively assumes that if you invite a 1000 brains to a global village meeting it is possible to find a higher order system for action which moves everyone through conflict barriers simultaneously - this requires cultural and historical reparation between peoples at the deepest levels of consciousness