the drivers questions has different answers:

from 1760s development of those who had access to engines

in writing the 2025 report looking foward to the next 40 yeras to 2025 and back to world war 2- we wanted to explore how lide abd livelihood depended on what networking opportunities you were born into and we valued mapping 5 webs that interact with such flows. Our maps draw on a particular stream of intel - this was given to my father had been asked by von neumann to train economist journalits in the biggest scoop being what will people do with 100 times more tech every decade 1930s to 2020s

we saw emergence of 3 webs 1 form 1990, 2 as defining milllials hopes from early on in 21st C; the 3rd as the 21st came of age in the 2020s; in 1984 the kanguage of webs barely existed nor did much structure in terms of goals that expoentially explain sustainmability or extinction; the economist had been born by london scot japmes wilson around the 2 goals engd hunger ; and end poverty; though his life proved the need for end death by not having minuimum health solution knowhow; and as an alumni of adma smit wilson would have been as curious as antone about educatyiuon being for all not just for the few to adminstrate over everyone else

we chose our 5 webs by adding 2 from history - peoples who had access to tele and electricity and those who did not. avcess to tele and electricity begain systemically out of switzeralnd 1865 when couldntries started to design one telegraph system - one defing dynmaic of tele apart from its greek origins on conecting peoples across long didtasnace is there is no value in 2 sustems when yoiu can link one set of maps - this aplies to telegraph telephone telex television (as well as other media eg radio) 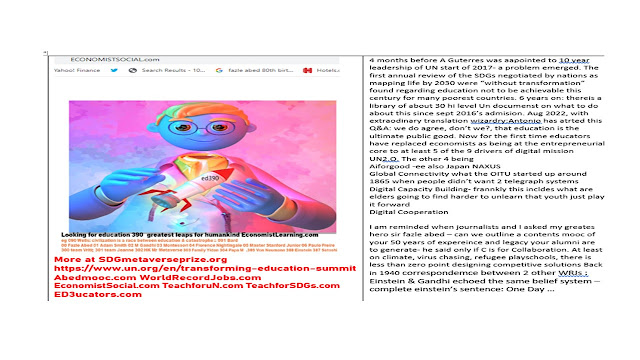 my father hadquite an unique adolescene and yoiung adulthood age14 -28 which may explain his life energy toward uniting all peoples growth and safety; I mention this as much sp that we can question what education beween age 14 to 28 may be most needed as the chaotic age of 100 times more tech now multiplies its 10th decade as enabling you to judge what biases our writings have even as we have tried to maximise transparency in interpreting von neumanns challenge to thise emdi=ting markets and intergenerational win0win0wins; its my understandding atht parenting good (family as the core human development system) concerns designing intergeneration opportunity to be more than your generation had and by defintion thats also moeans leaving nature assets in as good a condition as you were born into

*home schooled in british embassies including Stalin's moscow to age 13 -grandad was central link in british intel of risks of hitler & stalin; at age 22 grandad's own grad studies in religion at heidelberg had been interrupted by world war 1 where his fluency in German made him a minor spy)

*with "google maps in head by 1945" and joy of surviving world war2 -start up of 6 years of greatest scoops of any (news)paper journalist - last class keynes "increasingly world ruled only by the handful of economists who scribbles become law" (reference last chapter keynes general theory of employment, interest & money 1936) ; at cambridge married daughter of sir kenneth kemp; sir ken's last project write up legalese of india independence - after 25 years as Bombay chief justice mediation with Gandhi

1951 on secondment to new york met von neumann at princeton- instructed on sharing journalist's greatest scoop - what to do with 100 times more etch per decade? (compounded by few luckiest people/places to get first next chance at AI for worse or for better -from 1960 2 luckiest education hubs of compound AI - face 70% of peoples lives due to pacific ocean out of stanford; face 25% of peoples lives due to atlantic out of MIT boston; informally tokyo was 3rd lab see consider japan 1962 -see kennedy's endorsement; ( i cant calculate whether 5% or 95% of peoples lives depend most on arctic circle- depends how you model climate deadlines and exponentials - i dont believe 2.5% warming is safe for anyone but doubt if this is ed3's first task)

my father's attempts to harmonise east west mediation of economics and education were based on that education 14 to 28 -but above all von neumann scoop (dad also did the biography of von neumann whose daughter marina is chattable with but another 13 years older than me!)- neumann's peers had less than 6 years to relay challenge to dad which was an unusal innovation challenge and relay baton!

whether or not dad (later I did a reasonable job -about quarter of all Economist leaders 1948-1988 written ; he was allowed one signed survey a year from 1962 which I try to post up at http://teachforsdgs.com; of course if von neumman was correct then about 99% of what 14+ year olds need to action and learn today cannot be examined because it depends on eg how metaverse as whole new game is mapped http://www.sdgmetaverseprize.org

I will include you in a wider group epicentred round john kiehl -since this is also the latest challenge in the context of everything changing at the Un including:* education summit at general assembly next month

*advancing guterres 9 box un2.0 digital roadmapping*turning round system of any sdg which is a yet spiralling in opposite ways to youth achieving the goal ever let alone mediating their own hopes of peace and climate harmony from 2030 on

biographies of 14-28 can be very interesting to study in cases of many entrepreneurial revolutionaries - eg comparte 2 of the builders of 1billiongirls.com - sir fazle abed and muhammad yunus- bonus round add in under 30 bio of jack ma!

Posted by chris macrae at 3:15 AM No comments: