Fazle Abed who i personally learnt most from died in Dec 2019, and among US academics Ezra VBogel's last book was wonderful when he debriefed us on his east coast tour. Sadly he was to die in 2021

My fathers's tors of Asia for Economist readers began in 1962 when president Kenenedy approved the ideas that supervilage and supercity maps offered multi win market exchnages that Asia needed to rise as well as integrate its two thirds of being with the white and blach third of humanity.

Historically developmenet seems to have mapped this route

Have i left anywhere out

Posted by chris macrae at 8:03 PM No comments:

The Yidan Prize was a bit different in 2019 as their main laureate to practice with - sir fazle abed died 20 dec 2019 after 50 years of servant leadership Abedmooc.com - the main ngo partnership to have empowered billion village women to end poverty - such was cultural tidal wave of girl power that came about when village muslim women designed 100000 person village collab platforms to replace top down aid with networking supported by paulo freire's pedagogy of the oppressed. It took an entrepreneurial revolutionary host - asian most brilliant young oil engineer and chartered accountant as fazle abed was at age 34 when the 8th most populous nation was born as bangladesh

DEC 2019: so charles yidan, the billionnaire who co-founded tencent but chose to dedicate the rest of his life to celebrating worldwide education from 2015's launch of the sdgs:  decided to launch a summit within a summit to remember sir fazle abed - the yidan/abed luminaries of education - unlike prize nominations luminaries come from any discipline that can help youth advance through education to be the sustainability generation

join us as we co-monitor the journey

so whislt charles yidan celebates youth education out of hong kong his evolution into luminaries has been matched by chosing the entrepreneur in residence at stanford to be direcdor of partherships with yidan - a suitable way to make sure laureate prizes and lumninary council additions leap forward with each other across hemispheres and all grades of pro-youth education , and teacher-centric adaptation

he has brought in nobel economics winners from mit to validating how these scaling collabs work; he has brought in what look like stanford most relevant ai models in education ; he has asked oxford's vice chnacellor if she has yet replied to adam smith's criticisms of empire higeher education being designed for professors not for youth's benefits; and oxford has responded in nov 2021 by voting 2 to 1 that to be sustainable the millennial generation can no longer expect usa will come up with every solution 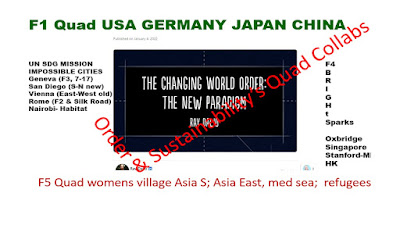 Posted by chris macrae at 10:19 AM No comments:

Hi I would like to understand where south korea is solving worldwide challenges with technology. I visited the wonderful island of Jeju in 2017 and have had overnight stops in seoul but unlike tokyo that I have been to various times from 1985 I dont know very much. What I do see if there is to be a sustainability generation: In New York (for me the one hopeful city in usa beyond nationalist politics) one needs to talk two development alphabets - 17 sdgs of United Nations with next 2 years peak of what Guterres can do; the ESG. I know one of Japan's elders of ny finance (at nippon life) who understands ESGs from Japan and Asean clients of Nippon Life. Should I try and introduce you? When it comes to Artificial Intel for humanity I see Korea as a joint world leader ; the UN tries to connect this through Geneva #AIforGood ITU; Stanford and MIT remain the 60 year old AI labs -legacy of Von Neumann. My father at The Economist became von neumanns biographer. When it comes to edutech (my passion if not my expertise) Gordon Brown has asked Koreans to lead formation of Asia Education Commission. These are my guesses. Happy to be corrected- have no direct vested interests anywhere in Asia though there are a few people doing great tech in hong kong who I try and keep diaries of. I do, try as a nationless scot, to study china independently of everywhere else. Its one fifth of humans seem to have some very interesting AI explorations to do. One of my heroes was Ezra Vogel - probably the only academic in usa who kept door open to discuss human connections across big Asian nations. I got 8 trips to Beijing between 2015 and 2018, Christian Rosier and his partner Ms Song were always very kind showing me around. Do you know them? In fact I first met Ms Song when she was helping about 20 chinese student architects explore UN headquarters in 2015, She is passionate about how artists can bring borderless joy to communities. Dad Norman Macrae at The Economist and I wrote a futures book 2025report.com in 1984- would tech sustain or destroy millennials world? I am trying to bring together a library of positive ways forward. My father's greatest end-poverty inspiration fazle abed in bangladesh came up with a legacy mission. Connect 50 Asian universities sustainability graduates in replicating massive community sdg solutions. After 15 interview with Fazle Abed some young journalists and I are still trying to map where to connect those universities and under 35s professionals. I do know Vincent Chang the vice chancellor Abed headhunted to connect University relationships -if he'd be a useful introduction please say.

for jeju view please see www.greenbigbang.com -its relationships wit5h aiib- being the first international event the then new pres moon jaer-in spoke at; the potebtial harmony of s korea's winter olympics- ande how many dybsnjucs have since fallen apart

suggestions for people to interview latest ed 2025report include

Alex is a operator and investor. He launched Blind, an anonymous workplace social app and previously cofounded Hashed, the largest crypto assets VC in S Korea. Alex splits his time between SF and Seoul. Working on projects, advising startups and dabbling in angel investments.

Posted by chris macrae at 5:13 AM No comments:

Posted by chris macrae at 7:50 AM No comments: