when i 1984 dad (norman macrae of the economist) and I (chris.macrae@yahoo.co.uk) published the first report on could humans race sustainably by 2025, we were most concerned with sharing john von neumanns exponential consequences (see bio); never hace 3 generations todays younger half of world, parents and grans faced a trillion times more tech change 1955-2025 but that is neumanns legacy- and it means we need to get tech for eveyonne on life changing markets health, education, finance - father published a companion survey in the economist 1984 -the idea if you dont see better health/safety every decade for all from 1984 the know digital is being falsely designed for most people (eg by a few ever richer men); 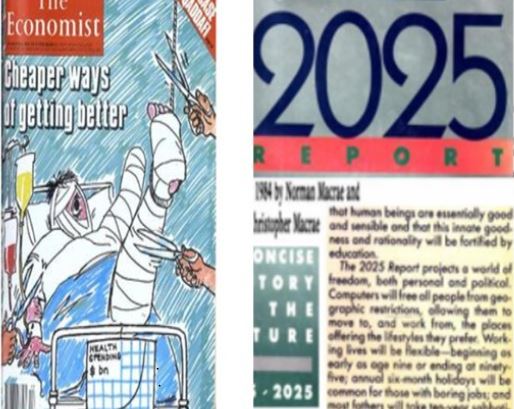 the problem of mediating community challenges like health, education, water and going green is that they would take more tech than fixing finance for all- so if we dont find models making small saving/loans/community enrterprises 10 times less costly by 2000 - again we are going in the wrong direction- in chapter 6 you will see the biggest headline warning of the book- all 7.5 billion beings will be in a terrible mess unless most people afree by 2000 that the biggest risk to humans is discepancies in incomes and expectations of rich and ooor nations and start mobilsing solutions</span><div style="color: black; text-align: left;"><br />while there seemed to be a lot of chat about this millennium goal clearly it was not understood in washington dc or london or any g7 seat of power as evidenced by everything that has so far happeneed in the 21st c bringing us ro 21-22 the last best chance to precent extinction - we gave the tech to solve this - we have experienes of a billion women who have solved this in their communities; are we able to zoom sdgs acyions everywhere or will a very few superpowerful people continue to block humans from uniting<
Posted by chris macrae at 3:31 AM